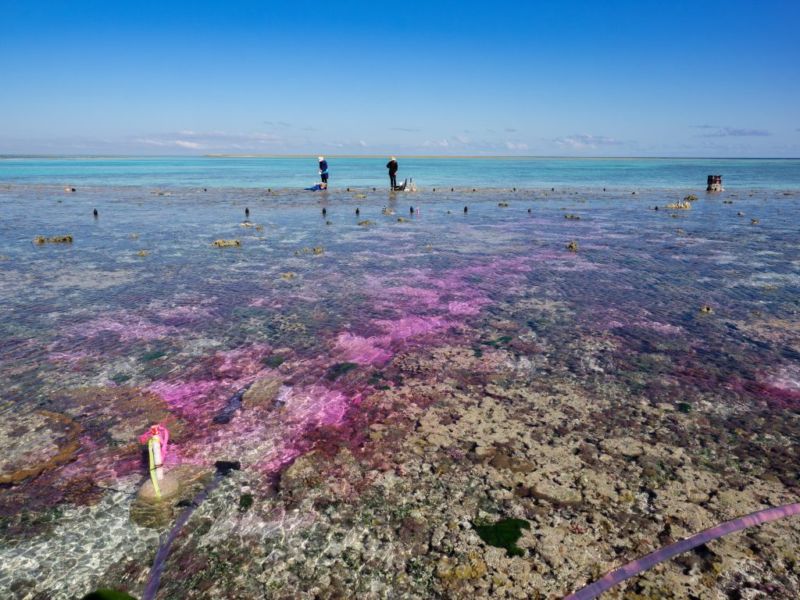 Coral reefs are not just pretty and cool – beyond tourism dollars and once-in-a-lifetime diving experiences, they provide real utility to human society. They provide homes to about a quarter of the world’s fish, which many people rely on as a food source. They can act as a barrier to rising sea levels, and they can protect coastlines from eroding.

But thanks to all the carbon we’ve pumped into the air, coral reefs are disappearing. Fast. Part of that is heat stress, but CO2 can also influence coral’s ability to form reefs in the first place. A new experiment gives us our first look at how much this affects a complete reef ecosystem.

But tracking the actual effects is remarkably challenging. Experiments have been carried out in controlled laboratory settings on isolated species but not in the open ocean where the effects of CO2 interact with variations in light, temperature, water flow rate, and the availability of nutrients. Only in the open ocean can all of these factors be assessed in unison on the entire coral community. Our ability to deal with any future damage to coral reefs depends upon this knowledge.

A group of marine biologists took advantage of the structure of a reef at One Tree Island in the southern Great Barrier Reef to set up an experiment in an otherwise natural environment.

At low tide, water flows over this reef from a higher lagoon to a lower one. The researchers bubbled CO2 through a tank they placed in the higher lagoon to increase the concentration of carbon dioxide in the seawater flowing over the reef, bringing it to levels projected to occur later this century. They then measured the rate of coral reef calcification—i.e. the formation of more reef—at several sites after the treated water passed over it. This was compared to rates measured before the experiment.

CO2 enrichment lowered the coral reef’s net community calcification by 34 percent compared to background. Previous laboratory experiments had estimated the calcification sensitivity of corals to be between 15 and 28 percent. The researchers who conducted this study suggest that their new results might show a larger impact because of the presence of crustose coralline algae in the ecosystem, which can alter the balance of carbonate ions. Alternatively, the calcification rate may increase in sensitivity as the concentration of carbonate ions in the water decreases, and this experiment has revealed a snowball effect that we could eventually see in the wild….