FREE AND OPEN TO THE PUBLIC

About the film “Chasing Coral”
Chasing Coral is a film directed by Jeff Orlowski and produced by Larissa Rhodes at Exposure Labs production. It was filmed over 3 years with 500 hours of underwater footage from over 30 countries and was made with the support of more than 500 people around the world. Synopsis: Coral reefs around the world are vanishing at an unprecedented rate. Divers, photographers and scientists set out on an ocean adventure to discover why the reefs are disappearing and to reveal the underwater mystery to the world.

Win prizes
Children are invited to come dressed (and face painted if they like) as a Hawaii marine animal found in coral reefs and prizes will be given for most creative, colourful and realistic animals without using plastic for their costumes.

The purpose of the Hawaii launch event is to get the public excited about the 2018 IYOR and to take part in activities
throughout the year which are focused on raising awareness of the importance of the reef, the threats to its survival and what the public can do to protect the reef. Countries around the world are taking part in the 2018 IYOR which is being co-chaired by the Government of France and the Australian Government through the Great Barrier Reef Marine Park Authority. Through launching the 2018 International Year of the Reef in Hawaii, this state is joining states around the world in an effort to:

The 2018 International Year of the Reef aims to:
Strengthen awareness globally about the value of, and threats to, coral reefs and associated ecosystems; Promote partnerships between governments, the private sector, academia and civil society on the management of coral reefs;
Identify and implement effective management strategies for conservation, increased resiliency and sustainable use of these ecosystems and promoting best practices; and share information on best practices in relation to sustainable coral reef management.

This free, public event provides the public a way to connect and learn about the reef and the threats and solutions by interacting with the information tables by various non-profits and government agencies, hearing the keynote address by coral scientist Dr. Ruth Gates and seeing the film “Chasing Coral”. As this is a global celebration, by having this launch, Hawai`i will be officially joining in the celebrations around the world for the 2018 International Year of the Reef. 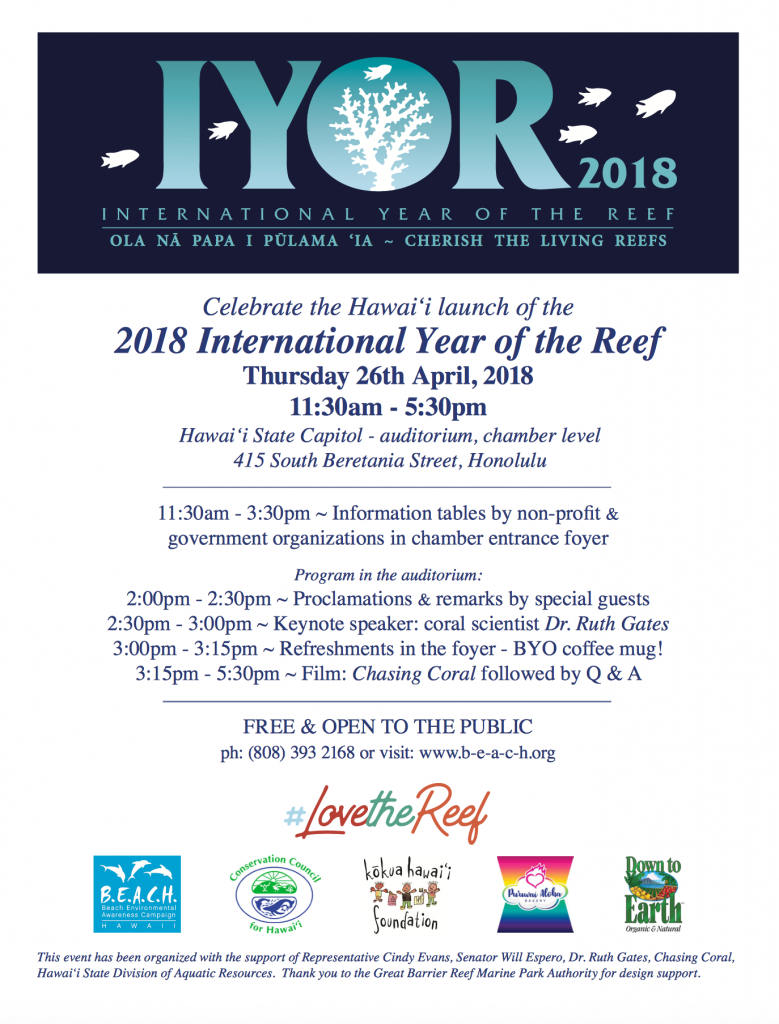